Recently we went to Verulamium Museum which is all about the Roman life in St Albans. It showed us all the artefacts and mosaics they had found by archaeologists that excavated the Verulamium land.  In the pictures below it shows us looking at a huge mosaic that had been preserved for 2000 years.

We then had a workshop all about Roman life and what they sold on there stalls. We also got to try some fake Roman clothing which were all made for how rich you were or how poor. We had to look for the right artefacts that were on are shopping list. Some things they bought that they thought were healthy for them but now they are not. For example, they thought putting stuff in their ear to get ear wax out was heathy for them but of course now we know it isn’t.

We were given some questions about the artefacts that were behind the glass which we had to answer. These were all pots, tubs and beakers that they used to hold food water and wine to keep stored. In the booklet we had to answer questions, write in roman numerals and draw our own mosaic.

Although it was raining and wet for this short walk to the St Albans Abbey which was named after a Christians who lived in St Albans.  We had to take a photo to show how much fun we had on this school trip this school year in year 4!! 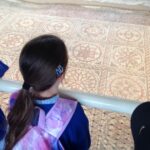 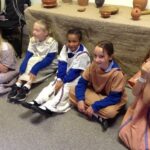 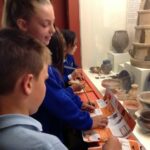 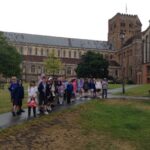